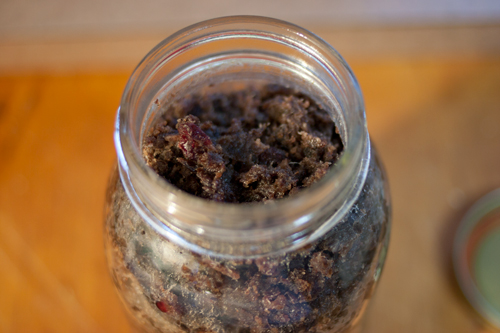 Start This Recipe 24-48 hours in advance

Accessibility of ingredients, ease of preparation, and affordability

I didn’t know I had a Line when it came to food. But I think I crossed it here. When I bemoaned this fact to the Sweetie Pie, who had watched me labor over Pemmican for several days, he very simply said “Well, they can’t all be winners.” Yes, good point. And so I present here the first loser of my tour through Nourishing Traditions.

This recipe, along with last week’s recipe, came about through the Sweet Pea’s history lesson on the Ancient Native Americans. When I suggested we find some native recipes to cook up, she eagerly picked out the Pepitas (see last week’s post) which were very tasty, and (surprisingly) Pemmican, which was not as tasty. Or terribly tasty at all.

You know how something–a word, a place, a food–can be unknown to you for decades, and then all of a sudden it’s everywhere? That’s how pemmican has been for me. Once the Sweet Pea picked it out, I’ve seen it on blogs, I’ve seen it sold commercially, and I saw it in a diorama at the Museum of Science and Natural History. Pemmican is the most perfect travel food ever invented. It consists of dried meat (protein), animal fat, and perhaps some berries (carbohydrate/sugar). Practically every Native American culture has some version of it, and men have lived off of it for weeks, months, maybe even years at a time. When properly prepared it never goes bad–seriously, NEVER. There are accounts of pemmican being found that is decades old, that has only been protected by animal skin. And it is, if not good (as in “tasty”), it’s at least good (as in “edible”). There is a truly fascinating account of the role of pemmican in American history here (scroll down just a bit on the page). Once I read this information, I realized I’d made a lot of mistakes in my process. So if you decide to go for a batch of pemmican, I hope you can learn from my mistakes.

1. Slice beef into thin strips, spread on oiled racks placed on cookie sheets and bake several hours in a 150 degree oven until well-dried (you may also use a dehydrator). 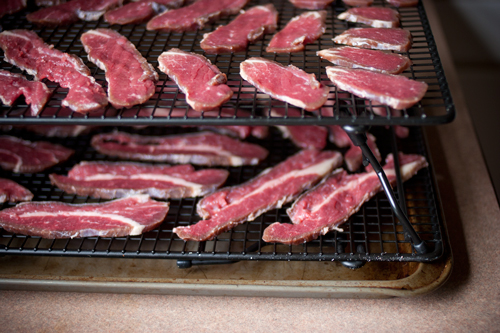 We have a really great local, little meat store that sells all kinds of locally- and properly-raised meats and animal products. I love this little shop and am in there almost every week. But it is a curious thing that on the day that I went to buy ingredients for pemmican, they did not have beef. They had buffalo. So we made our pemmican uber-authentic by using buffalo brisket.

Slicing into thin strips can be tricky. I read a tip that said to partially freeze the meat before slicing and that made it a lot easier. Don’t freeze it solid, just freeze it enough so that it’s not going to slip around under your knife.

I only had three racks, so had to dry the meat in two batches, which took a very long time. If you want to do this recipe, I would recommend doing a half batch. It will significantly reduce your labor. For my meat to be “well-dried” it took a good 12 hours for each batch. You want your meat to actually be past the jerky stage. It needs to be crispy and brittle. This was actually my first mistake–I didn’t dry out my meat enough.

2. Cut suet or tallow into small pieces and place in a pan. Melt over medium-high heat and allow to boil until any pieces of skin, meat or gristle have become crisp. 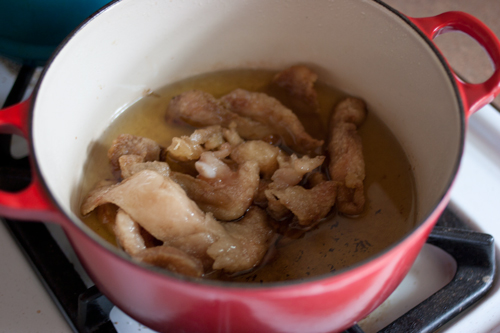 This is the point at which I left the place known as “Things I Know Something About”. I knew that suet and tallow were fat, and that suet is something you feed to the birds in winter, and that’s about all I knew. Where do you buy it? What’s the difference between the two? What does it look like? These are things I did not know.

Apparently, tallow is rendered suet. Tallow is shelf-stable and doesn’t need to be refrigerated, but suet does. Rendering is a simple act of separating the pure fat from other organic materials. I tracked down buffalo suet at my favorite local meat store, who were very kind in helping me locate it in their freezer. If you don’t have a local butcher, I’m betting you could get the butcher at a natural food store (or even a supermarket if you have nothing else) to save some for you. Mine came in a vaccuum sealed bag and looked about like what you’d expect buffalo fat to look like.

Since I didn’t really know what I was doing here, I made a lot of mistakes. And since Sally’s instructions aren’t all that detailed, I’ll let you in on the things I learned. First, I cooked my fat at too high of a temperature. You want a low, slow heat. You don’t even want the fat to bubble, just melt gently. Think of the wax in a candle and how it melts without bubbling. That’s what you’re after.

I also didn’t realize that those bits of gristle or whatever floating in my fat were actually not fat. So I kept heating it waiting for them to melt. By the time I realized these were the parts that I was supposed to be removing, I’d already cooked it way too long.

So if you, too, attempt to render fat, keep it low and slow, and don’t cook it too long.

3. Pour the hot fat through a strainer into a glass measuring cup–you should have about 3/4 cup rendered fat. 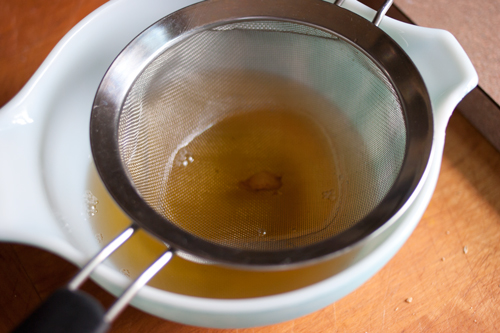 This step removes any of the smaller pieces that you’re trying to remove. Do be careful not to splatter it on yourself. Boiling hot fat is too painful to consider.

4. Cut dried beef into pieces and process in batches in the food processor, several minutes per batch, until the beef is reduced to a coarse powder. 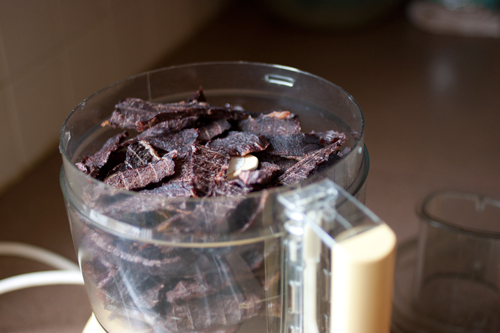 Here is where I made my second mistake: I did not process the meat long enough. I did it for quite a while, but after a few minutes the motor began to heat up and the Peanut had a look of terror on her face and I couldn’t even hear her screaming because the sound of the grinding meat was even louder than her. So I stopped it at that point. You should keep going until yours is ground into an evenly coarse powder–no large chunks at all. Here’s what mine looked like when I stopped (yours should be ground even further): 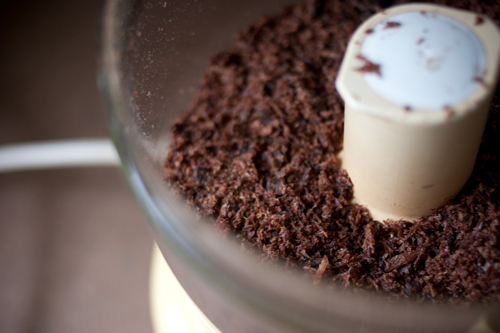 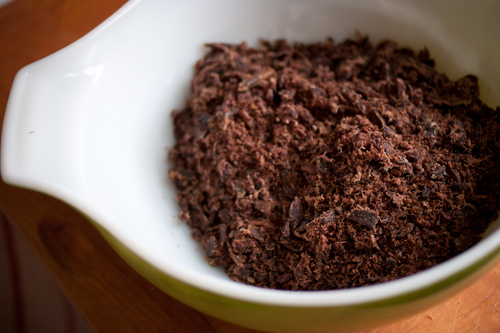 And here was my next mistake (told you I made a lot of them). I should have chopped up the cranberries before adding them, and I should have added the fat a very little bit at a time. I ended up with so much fat that if you were to squeeze a ball of my pemmican in your hand some fat would squish between your fingers. I think it would be better if it was just enough to make it stick together, like a pie crust dough. And I know it would have mixed more evenly if the cranberries were chopped into pieces the same size as the beef.

6. Press into a quart-sized, wide-mouth mason jar and cover tightly. Pemmican may be stored at room temperature. Eat pemmican as is, or fry it up in a pan. 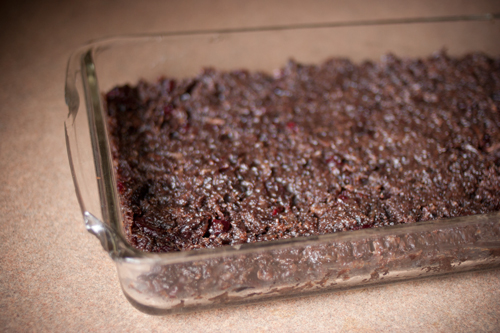 For some reason I thought that we’d be able to slice this into pieces, like a brownie, and so I opted to spread it into a baking dish. It was really more of a “spooning” consistency, so I ended up transferring it to a jar anyway. I only mention it because you might be thinking the same thing. I’ll save you the trouble and tell you to just put it in a jar.

And in spite of the stories of decades-old pemmican being still edible, I opted to put mine in the fridge.

So at the dinner table everyone tried it (brave souls), but the only one who asked for seconds was the Bean. Actually he asked for thirds, and fourths. Sweetie Pie and I were incredulous. This is the boy who threw a temper tantrum every. single. morning for two years because we gave him oatmeal for breakfast. Go figure.

I’m withholding all of the Cook’s Rating stars, since I didn’t find the preparation to be easy or the ingredients affordable (that buffalo meat was pretty pricey). And while the ingredients were readily accessible to me, I recognize that not everyone has a local butcher shop selling suet in the freezer.

And I certainly didn’t feel like the end product justified my labors or expense. I’m curious to know if I would like it more if I tried making it again and corrected my mistakes. I’d also like to try marinating the meat before drying it to give it some more flavor. But I doubt I’ll be trying to make it again anytime soon, if ever.

I did find a commercially available pemmican bar and actually really liked the taste of it. The ingredients are nearly exactly the same as the ones I used, so why does it taste so different?? I’d have been pretty pleased if my pemmican had come out tasting like the bar I bought.

As it is, I have a jar of dried buffalo meat and rendered fat in my fridge. I’ve been thinking of some recipes into which I could incorporate it and have a few ideas. I’ll be posting one of them next week. Check back to see if I’m able to make lemonade out of my lemons.

We get a lot of questions about how our shopping list works. The Shopping List in Plan to Eat is unique because it creates a

Fall Sniffles and Sneezes? Sauerkraut to the Rescue! (Homemade, that is!)

In this article, we are going to learn about lacto-fermentation by making sauerkraut—a very healthful food for this season. In future articles, we will explore

I don’t know if you feel the same way or not, but fall has snuck up on me this year. Living in Charleston, we definitely